Nobody can say Rodney McMullen doesn’t know the grocery business. He started as a bagger at

when he was in college, rising through the ranks to become chief financial officer, then chief executive officer, of America’s biggest supermarket chain.

But can he lead the 2,764-store Cincinnati-based company through the changes upending the supermarket industry?

“You are in Cincinnati. You are a conservative bunch of people,” said Bill Smead, chief executive of Smead Capital Management and a Kroger investor. “Does anyone’s blood pulse through their veins with an entrepreneurial bent?”

first pushed into groceries in the late 1980s have traditional chains faced so many challenges. E-commerce is transforming the business, forcing cash-strapped companies to overhaul their operations and invest heavily in technology and talent to keep customers from straying to

At the same time, they have to keep food prices as low as consumers have come to expect. 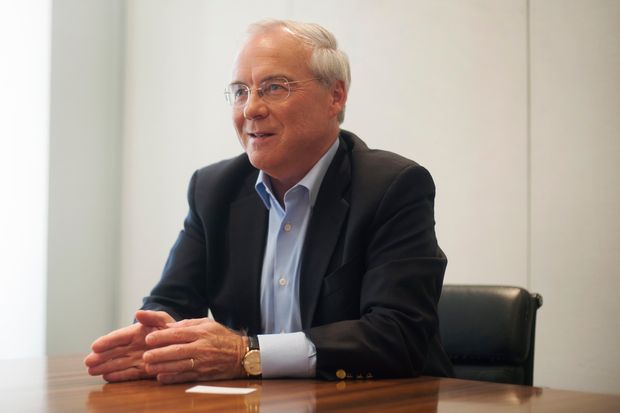 Kroger CEO Rodney McMullen says he believes the company has devised a plan to help it grow again.

The transition has proven rough for Kroger, which stayed focused on store sales long after mass-merchant competitors were investing in online-ordering technology and delivery services. Executives have debated which investments to make and how drastically to change the company’s business model. Some would-be technology partners have been turned off by what they see as the grocer’s conservative culture—including members of one group who stormed out of a meeting in protest.

Mr. McMullen knows it is a pivotal moment for the company and that investors are concerned. “We’ve got to get our butts in gear,” he said in an interview. “There was no doubt we were behind.” He said he believes Kroger executives have devised a plan to help it grow again.

and Walmart struggled before improving stores and e-commerce operations.

filed for bankruptcy protection in October. Toys “R” Us was liquidated in March 2018.

Online ordering and delivery has been around in the U.S. grocery business for decades, but it hasn’t caught on as rapidly as it has in other sectors. Many U.S. shoppers live close to supermarkets and prefer to select food from the aisles. That is changing as more young people form families and older people get more comfortable ordering online. One option proving especially popular is for consumers to order groceries online for pickup in a store’s parking lot.

Online purchases account for just 5% of the roughly $1 trillion U.S. food and consumer-product market, according to Nielsen. Yet online sales are growing 40% annually, while in-store sales have been flat for years.

“It’s like driving on the autobahn,” Mr. McMullen told investors last fall. “It’s incredibly exciting. But there’s a lot going on, and it’s going on fast.”

Years ago Walmart became the largest food seller in the U.S., while Kroger remains the biggest supermarket chain by stores and sales. Walmart boosted its delivery business with its 2016 purchase of Jet.com, bringing on Jet executives to accelerate online grocery sales. Target bought Shipt Inc., another grocery delivery service, in 2017. And Amazon broadened its reach into the grocery business by buying Whole Foods in 2017, although it, too, has struggled with online delivery of groceries.

Sales at Kroger have grown more slowly than at Walmart and Target, which have more robust online operations.

To catch up, Kroger has budgeted $4 billion for investments, including warehouses managed by robots, a meal-kit company and digitally enabled shelves that market products to customers through LED displays. Last year, it formed a partnership with an autonomous-vehicle startup, Nuro Inc., and started selling its line of natural and organic products on Alibaba Group Holding Ltd.’s Tmall site in China.

Those investments are denting its profits at a time of intense competition to sell groceries cheaply. Its shares are down 17% since June 2017, when Amazon said it would buy Whole Foods, and have dropped after five of Kroger’s eight latest quarterly earnings reports.

Sapphire Star Capital, an investment fund, sold a $350,000 stake in Kroger in September. “We just had to cut them loose,” said Michael Borgen, the fund’s chief executive. “They just got too volatile.” 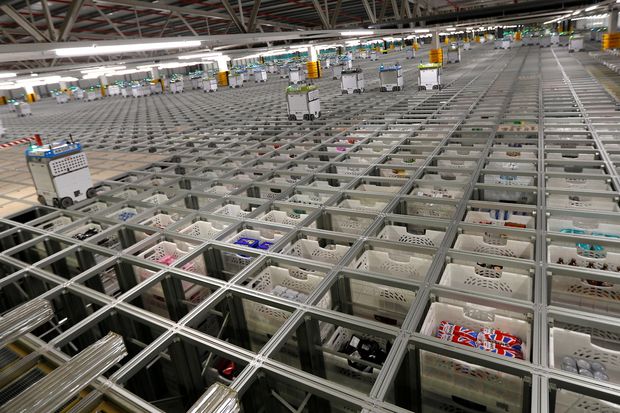 Kroger has invested in Ocado Group to build a network of automated warehouses for online retail akin to this Ocado facility in the U.K.

John San Marco, a research analyst at Neuberger Berman, an investment-management firm that owns Kroger stock, said the company is doing the right thing by investing in online operations, even if it dents profitability in the near term. “Kroger is in the very early innings of a business transformation,” he said. “This isn’t a one and done.”

Mr. McMullen, who became CEO in 2014, has acknowledged that Kroger was slow to invest online. He said many competitors also avoided investing in online operations until recently. On Kroger’s latest earnings call in March, he sought to reassure investors that Kroger’s investments will pay off. “You have to start somewhere, and you have to learn,” he said.

Kroger has a record of dabbling in digital projects without committing to more significant changes to its business, current and former employees say.

In 2000, when Mr. McMullen was CFO, Kroger canceled a pilot delivery program in Columbus, Ohio, because of low demand. Another pilot has been running at Kroger’s King Soopers chain in Denver for two decades without expanding to additional parts of the country.

At the time, Kroger’s digital-operations staff fit into a small room at its Cincinnati headquarters. They started meeting every Friday at 7 a.m. to discuss ways to improve Kroger’s digital efforts. The operation soon expanded.

Kroger didn’t have the infrastructure to ship goods to customers. Building warehouses and wooing tech talent to build an online-grocery portal would have cost hundreds of millions of dollars, employees say. 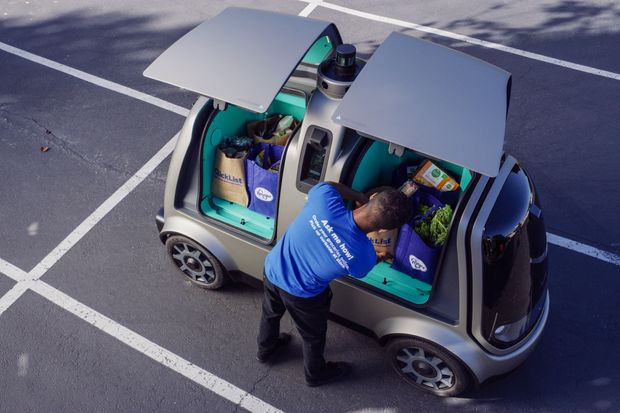 Kroger is experimenting with using autonomous vehicles to deliver groceries.

Kroger managers remained focused on their stores, where sales determine their compensation and chances for advancement. Some believed boosting online sales would create extra work and distract the company from maximizing store revenues, former executives said.

“Most of us, when we say the digital world, automatically conclude that e-commerce is where everything is going,” then-CEO David Dillon told investors in 2013. “I don’t draw that same conclusion.” Reaching customers digitally also included things like online coupons and social media, he said.

Amazon continued to siphon diaper sales from Kroger and other retailers, notching roughly $500 million in diaper sales last year, according to estimates by market research firm Edge by Ascential.

Online food sales are dwarfed by in-store sales, but they are growing rapidly. 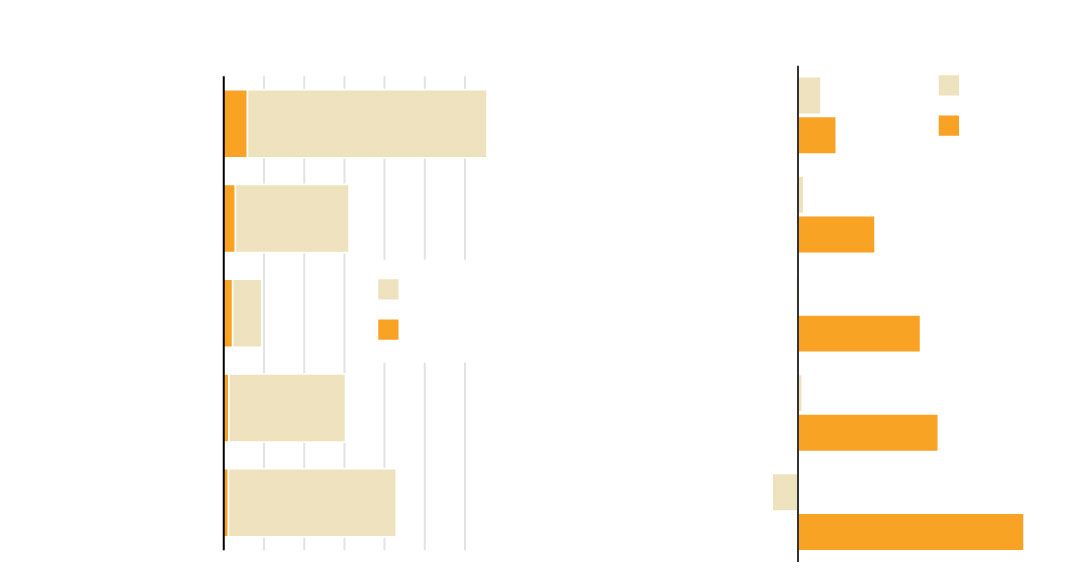 Kroger turned to acquisitions to boost its digital reach. It bought Vitacost.com, an online retailer of natural foods and supplements, for $280 million in 2014. But Kroger was slow to integrate Vitacost’s technology into its operations. That frustrated Vitacost’s founders and Kroger employees who had brokered the deal, according to people from both companies.

A meeting at Vitacost’s Boca Raton, Fla., headquarters soon after the deal closed underscored the divide. Vitacost employees suggested emailing promotions to customers so that discounts could be tweaked more often than through the paper circulars that Kroger planned months in advance.

Kroger executives balked, with one marketing head saying that Vitacost was a rounding error in the company’s overall balance sheet and it wouldn’t just change its promotional plans, according to people from both companies. Some Vitacost executives walked out in protest.

Kroger was slow to add a link to Vitacost on its website or place signs in its stores promoting Vitacost. Officials from the two operations clashed over whether to let Vitacost accept Apple Pay or PayPal, the people said. Vitacost’s revenue grew less than that company had expected. Engineers and executives left the company. Other Vitacost executives have remained at Kroger and helped on various technology initiatives. 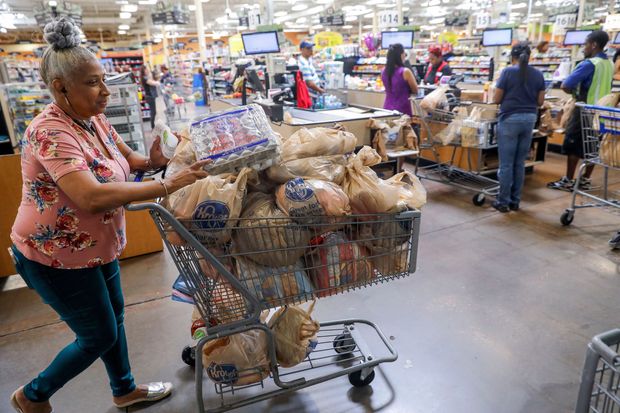 Although Walmart is the largest food seller in the U.S., Kroger remains the biggest supermarket chain by stores and sales.

Some at Kroger acknowledge more could have been done to make its Vitacost investment pay off. “Some look at us and argue we haven’t done much with Vitacost,” said Michael Schlotman, who stepped down as chief financial officer this month and will retire at the end of the year. “It’s a fair assessment.”

Kroger now accepts PayPal on Vitacost but not its other e-commerce sites. It uses Vitacost’s technology for a ship-to-home grocery service that made its debut last year. Executives hope the service will win back business from Amazon’s subscription service for staple goods.

How important is it for your supermarket to offer an online ordering option? Join the conversation below.

Kroger recently tried to partner with, invest in or acquire three different startups: Shipt, the online grocery delivery service; meal-kit company Plated; and Boxed.com, a bulk online retailer, according to people familiar with those efforts. None panned out.

Target bought Shipt in December 2017. National grocery chain Albertsons Cos. purchased Plated in 2017 for more than Kroger offered, according to people familiar with the negotiations. Boxed executives and investors balked over terms offered by Kroger in negotiations, talks stalled and Kroger never made a formal offer.

“They aren’t willing to pay enough to buy technical talent,” said one person involved in negotiations between Kroger and those startups. 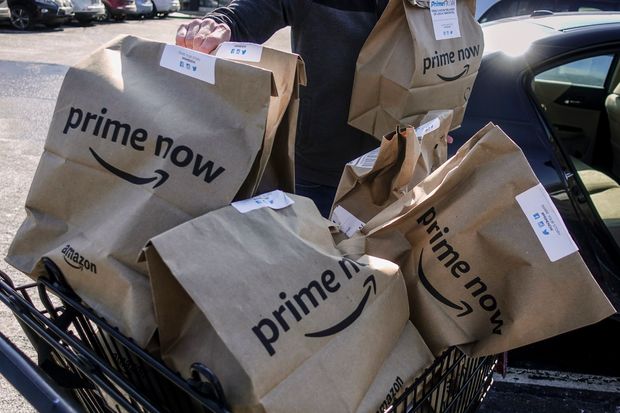 Amazon broadened its reach into the grocery business by buying Whole Foods in 2017.

Yael Cosset, Kroger’s chief digital officer, declined to comment on any negotiations. He said the company tends to be more conservative in rolling out tech pilots that directly affect customers in stores, but has moved faster behind the scenes on other efforts.

Kroger officials say the company is now working with

, IBM Corp. and other tech companies, and is spreading the word about Kroger to potential tech startup partners at the Cincinnati-based Cintrifuse startup investment fund.

“Kroger has been very bold in their vision,” said Luke Jensen, chief executive of Ocado Solutions, a division of U.K.-based automated-grocery company

Some suppliers give Kroger executives credit for acknowledging the challenges they face. Last year, one grocery-delivery vendor told a Kroger technology executive that despite the company’s investments in automated online warehouses, it still wasn’t getting digital orders to customers as fast as its competitors.

The executive agreed, according to a person familiar with the conversation. To figure out how to make same-day deliveries, he told the vendor, Kroger might need to make another acquisition.

As the company tries to change, some senior executives are leaving. Mr. Schlotman is retiring after more than three decades at the company. Christopher Hjelm, the chief information officer who urged fellow executives to help him turn Kroger into “a technology company that just happens to sell food,” is also departing. Matt Thompson, the digital official who devised many of Kroger’s online pickup and delivery strategies, left earlier this month. Investment banker Robert Beyer is stepping down as lead independent director in June. 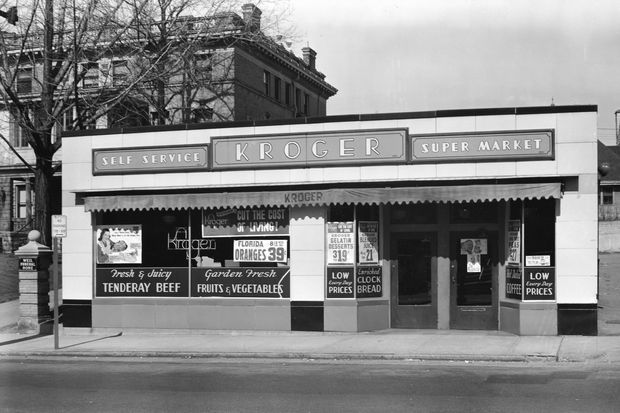 A Kroger supermarket in Cincinnati in 1948.

A Kroger spokeswoman said the retirements were long planned. Mr. McMullen has recruited new officials with technology experience at the executive and board levels, she said.

Executive bonuses have declined in the past two fiscal years, reflecting Kroger’s weaker sales. Financial filings show that executives hit less than 4% of their targets for performance-based bonuses in the last fiscal year, the lowest payout in at least two decades.

Mr. Cosset, the chief digital officer who is set to succeed Mr. Hjelm as chief information officer in May, has set ambitious time lines for opening online-pickup locations and other goals. Yet he has also been careful not to drift too far from Kroger’s focus on its stores.

Write to Heather Haddon at heather.haddon@wsj.com