Latest News
Home /Are Your Frequent-Flier Miles About to Lose Value?

Brace yourself for what may turn out to be the next big devaluations of your frequent-flier miles.

is testing basic-economy awards—letting frequent travelers use miles to pay for the carrier’s bare-bones, or basic-economy, tickets, which are a tier below the standard economy level. That includes no advance seat assignments, inability to change or upgrade and last-group boarding, so your carry-on likely will be gate-checked. Veteran travelers fear this change could easily lead to frequent fliers spending more miles for a regular economy ticket.

And as Delta, American and United roll out premium economy on international routes, changes are coming to upgrades. Premium economy typically costs $500 to $1,000 more than regular economy. You get an extra inch of width, more recline and legroom than standard economy and sometimes better food. Still, it’s a far cry from business class. 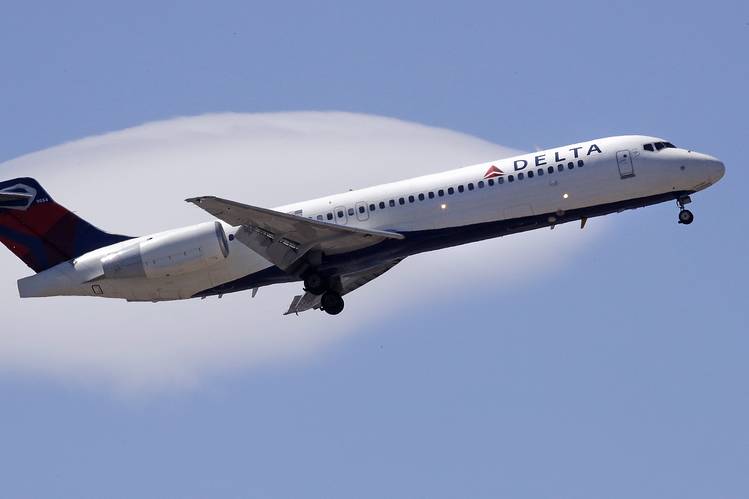 Right now, you can upgrade a coach ticket to business class if you spend enough miles or have top-tier status and an international upgrade certificate. But on many airlines outside the U.S., an upgrade only goes up one class of service—economy to premium economy, not business. So you’d need to buy a premium-economy seat to upgrade to business class. American’s rules suggest it’s headed in that direction.

Airlines say they are adding options for travelers and improving their loyalty programs by giving you more ways to use your frequent-flier miles. To road warriors, both moves make the seats they really want more expensive.

Economy and business-class award ticket prices have gone up and your ability to upgrade from economy to business has gone down, says Andrew Gold, a Tampa, Fla., university professor. “Now they are complicating things further so your baseline, instead of an economy fare, is going to be basic economy.”

American, Delta and United all reduced many travelers’ ability to earn miles when they switched to paying out miles based on fare rather than distance traveled about three years ago.

The best perks of loyalty programs lie in top-tier status, where you get early boarding, bag-fee waivers, better service and quicker rebooking. If you are in the very top tier of a program, you may get upgrades.

To many travelers, the Delta test of basic-economy awards is part of a pattern—reducing what’s included with the lowest price and forcing people to pay more to get what used to come standard. Basic-economy fares started as tests in select markets, originally pitched by airlines as a countermeasure to discount airlines, then spread world-wide. Since regular economy is about $60 round-trip more expensive than the lowest price, frequent travelers figure they’ll soon have to pay more in miles for regular award tickets, too.

“I have no doubt at all that this will become the standard. Once you lose something, they don’t give it back to you,” says Lucian Chen, a Delta platinum-level frequent flier and a New York-based attorney. “The systematic devaluing of miles is upsetting.”

Frequent travelers shun basic-economy tickets because of the restrictions and have little appetite for basic-economy award tickets, especially if they have lots of miles in their accounts. But for frugal travelers, those tickets can be an option to get an award when they otherwise might not have enough miles.

Delta says it is testing basic-economy awards on a handful of routes: between Minneapolis and Phoenix and routes out of Charleston, S.C. Basic economy is often priced about 5,000 miles or so less than standard. That’s consistent with the cash price being about $50 or $60 higher for standard economy over basic economy. If you don’t care about a seat assignment in advance and are willing to live with the other restrictions, a basic-economy award ticket can save you some miles.

Since Delta no longer publishes an award chart, the price in miles for trips varies significantly, following the cash price. It’s hard to compare different markets, since demand for seats changes rapidly. But a spot-check of flights roughly the same distance as trips from Charleston gives some credence to road-warrior fears. 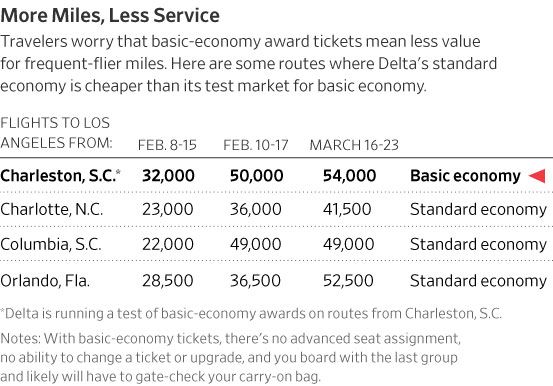 A Charleston-Los Angeles round-trip for Feb. 8 to 15 priced out on Monday at 32,000 miles for basic economy. Delta requested fewer miles for standard-economy trips to Los Angeles from Charlotte, Columbia, S.C., and Orlando, Fla., suggesting the basic-economy price was no bargain.

Delta says since it ties its award price to the cash price of the ticket, basic-economy awards will be cheaper, in miles, than standard. “The price of a ticket isn’t changing, necessarily,” Delta spokeswoman Kate Modolo says. “The rollout of basic-economy awards is not designed to impact main-cabin pricing but instead to offer more reward options.”

Ms. Modolo also says that by giving customers more ways to use miles, “we are making them more valuable,” not devaluing them.

While Delta says basic-economy awards are something customers have asked for, United says it has had no such requests.

Premium-economy cabins haven’t yet degraded business-class upgrades on U.S. airlines. But some of their international partners have.

American doesn’t yet offer premium-economy upgrades and awards—a spokesman says the airline is “working on it.” American’s upgrade rules already say that “upgrades are valid to the next cabin of service.” Once premium economy becomes the “next cabin of service,” an upgrade from an economy ticket may only get you premium economy, not business class.

“We felt it was important to retain that benefit,” United’s Mr. Covey says. “I don’t see, at this time, a future in which we put a system in where it’s only one cabin allowed. We’re really proud of the flexibility that we have.”

You can also use miles, or cash plus miles, to buy an upgrade as long as you’re not on the cheapest economy fares. Business class costs more miles than premium economy, but both are available on United and Delta. On United, if you buy a premium-economy ticket, you get priority over people with economy tickets for business-class upgrades.

MORE FROM THE MIDDLE SEAT

Write to Scott McCartney at middleseat@wsj.com