PARIS—Years before flames ravaged Notre Dame Cathedral, the landmark’s custodians realized they had a problem.

In 2013, the cathedral hired Didier Dupuy and his son to scale the building and install lightning rods at different points, including its central spire. Gaping holes and cracks they discovered in the lead roofing shocked them. Just below was a dry and dusty space of timber beams, known as “the forest,” that had supported Notre Dame’s roof for centuries.

A job that was supposed to last a couple of weeks took three months as the duo performed emergency repairs before quitting in frustration.

“We told them, you need professionals for this. We can weld, but it’s not pretty,” said Mr. Dupuy, who removed 110 pounds of rust from the cross atop the spire. “The cross was in very bad shape.”

On Monday, Notre Dame’s forest caught fire, incinerating the central spire and most of the cathedral’s roof in a disaster that dismayed the world. Notre Dame, with its limestone facade and stained-glass rose windows, was a resplendent jewel of medieval architecture to most who saw it. On closer inspection, according to church officials, contractors and donors, the cathedral was deteriorating from decades of neglect.

The flying buttresses that sustain its massive limestone walls were weakening. The spire, a fixture on the Paris skyline for nearly two centuries, was taking on water and rotting from the inside out.

Now investigators are looking into whether a project to renovate and reinforce Notre Dame somehow led to the blaze, questioning those who were at the site in the hours before it broke out. André Finot, a spokesman for the cathedral, said workers were inside the forest that day, reinforcing the framing so they could finish erecting a massive scaffold on top of it.

Workers were busy scaffolding the roof of Notre Dame in the hours before the fire began. Here is what they had done and planned to do.

Build scaffolding up to the top of the spire

Fire started at the bottom of the spire

The scaffold was specially designed to put very little weight on the cathedral’s structure and not interfere with views of its flying buttresses. “The scaffolding adhered to the most incredible security norms,” Mr. Finot said. The main contractor said the firm had followed all safety requirements.

The inquiry is just beginning, with debris and damage complicating the task. Authorities say evidence so far points to an accident, but they aren’t discarding any avenue of inquiry. Police have seen signs that joy seekers scaled the scaffolding in the months before the fire. Some posted YouTube videos from the cathedral’s top.

Behind the renovation was a push to line up funding and finish tens of millions of dollars worth of repairs in time for Paris to host the 2024 Olympics. The cathedral was counting on The Friends of Notre Dame, a group of American and French benefactors, to deliver funding and pressure the building’s owner, the French state, to make matching donations. Notre Dame doesn’t charge general admission, even though it is a tourist magnet that receives 30,000 daily visitors, more than the Eiffel Tower.

“For sure if the cathedral had been maintained regularly, with a higher level of funding, we would have avoided this,” said Michel Picaud, senior adviser to The Friends of Notre Dame. “The more you wait, the more risks you have.”

How much would you be willing to pay for an admission fee to support upkeep of a landmark like Notre Dame? Join the conversation below.

Notre Dame battled decay over the long history of upheaval in France. Built in the 12th and 13th centuries, it was desecrated during the French Revolution and consigned to decrepitude when Victor Hugo wrote the novel that immortalized the cathedral.

In 1905, France passed a law that made all churches built before that year government property. State ownership of churches became increasingly burdensome as the government grew cash-strapped in more recent decades. Meanwhile, church attendance was falling.

“It’s a fact of life that many of these churches are in need of upkeep,” said David Sheppe, president of American Friends for the Preservation of Saint Germain des Prés, the city’s oldest church. “Passing the plate around, it may cover operational costs. It does not cover maintenance.”

To receive government funding for repairs, churches were required to go before a committee at the culture ministry. Notre Dame fundraisers said committee members told them the cathedral was one of nearly a hundred Gothic cathedrals across France the ministry had to look after. 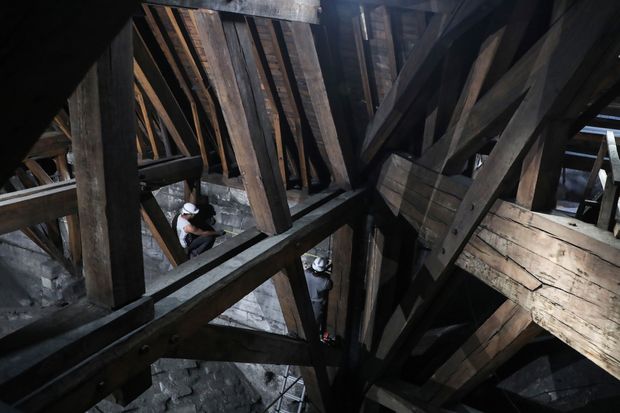 Restoration workers last summer measured a wall next to the Notre Dame roof timbers known as “the forest,” which went up in flames this week.

The state pushed Notre Dame to follow the example set by other historic churches that charge an entrance fee. Monsignor Patrick Chauvet, rector of Notre Dame, pushed back, according to a fundraiser present at the meetings, wary of turning a place of worship into another commercial tourist stop.

When a culture ministry official visited the cathedral during a religious feast day one year, Msgr. Chauvet gestured toward the crowds. “Who are the tourists here?” he asked. “Can you pick out who I should charge?”

“Keeping the cathedral free has always been the wish of the clergy,” said Mr. Finot, the Notre Dame spokesman.

In 2015, an American art historian, Andrew Tallon, climbed Notre Dame with a tripod-mounted laser to create a precise digital model of the building. He found grave structural weaknesses and decay. Gargoyles on the roof were propped up with plastic piping. Stone chunks of the roof had fallen off, ending up in a space one person involved with restoration called “a graveyard for architecture.”

A rooster-shaped weather vane that contained a thorn said to be from the crown Jesus wore at his crucifixion was broken. Cracks in the lead panels that coated the spire were allowing water to seep into its wood-frame core, testing the welding that held it together.

Most concerning were the flying buttresses, rib-like supports made of limestone that prop up the walls, a medieval innovation that allowed the church to have towering walls with stained-glass windows. Acid from Paris’s air pollution was eating at the buttresses. Flying buttress No. 10 was so weak that experts warned a wall was at risk of collapse. 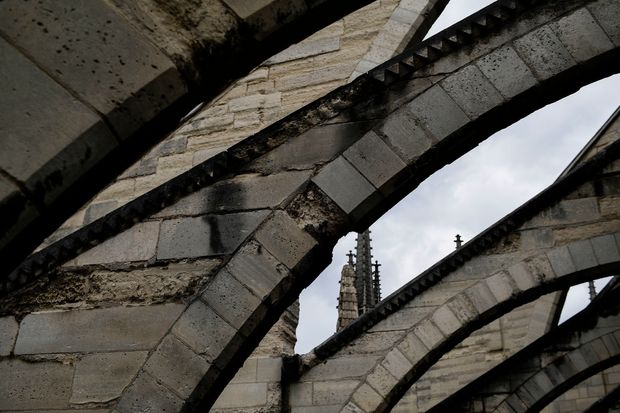 A photo of a flying buttress at Notre Dame taken in June 2017 showed how some were crumbling.

Mr. Tallon, who died last year, rallied a group of French and American art lovers to create a nonprofit, with a board that included executives and a retired French ambassador to the U.S. They pushed the French government to match any funds they raised up to a certain point.

The group didn’t start raising money in earnest until late 2017. It held soirées in the French embassy in Washington and the consulate in New York. The auction house Christie’s also co-hosted an event.

Notre Dame didn’t wait for the funding to be in place. Instead, the government published a call for bids in July 2017 to renovate the spire, the roof and the timber framing underneath. The estimated cost of the work authorized in 2017 was €4.3 million.

The flying buttresses represented the greatest structural risk, according to fundraisers. Church officials wanted to tackle the spire first.

“The spire was the most urgent thing,” said Mr. Finot, the spokesman. “It’s made of lead, and the lead was disappearing.”

Bidders had to take into account the cost of complying with a thicket of regulations that accompany work on a historical landmark. The construction site required fire safety inspectors to make daily rounds, checking every piece of electrical equipment. A detailed plan for various disasters was mandatory. Workers weren’t allowed to leave tools on the site.

Welders were required to check that their work had cooled off two hours after finishing. For lunch breaks, one crew member was expected to stay behind and watch for hazards. 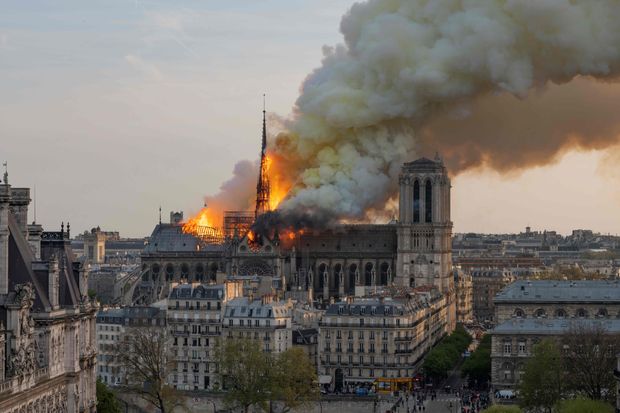 Smoke and flame billowed from the roof of Notre Dame de Paris on April 15 in a fire that later toppled the central spire.

The spire presented unique challenges. Scaffolding needed first to reach the cathedral’s roof, 50 meters off the ground, and then rise another 50 meters to the top of the spire, encircling the ornate structure without touching it.

Bidders also had to consider plans to expand the scaffolding later to reach the weathered lead roof, the timber framing beneath it and the weakened flying buttresses. The scaffolding alone, the government estimated, would cost €1.8 million.

“Monumental, the largest scaffolding ever put on top of the cathedral,” said Francois Leterme, whose company, Layher, was among the bidders. Mr. Leterme knew Notre Dame well because he had built a smaller scaffold there in 2009.

Gwenael Jousselme, who lost out in bidding to replace the spire’s lightning rod as part of the project, said he proposed a costly method of welding that reduced fire risks. The contract went instead to Mr. Dupuy, the man who discovered the cracks in 2013. Mr. Dupuy said he puts safety first.

The big winner was a family firm based in northeastern France. Le Bras Freres won contracts to erect the scaffolding around the spire, to fix the leaky roof and to repair the timber framework. Cathedral spokesman Mr. Finot said the winning design for the scaffolding was a technical marvel, resting on legs that reached to the ground without stressing the cathedral’s structure.

“Nobody has got such a contract in 150 years,” Julien Le Bras, a representative of the contractor, told a local newspaper at the time. “It is really something to say that it’s us who will do it. We are not working with a decade-long commitment to this, we’re envisioning the next 150 years.”

Jean-Michel Leniaud, an architecture expert, said it was unusual for a single contractor to win all three tenders—scaffolding, roofing and woodwork. Usually there is a separate company for each, he said.

The schedule was tight. The government wanted the scaffolding completed by July 2019, according to Marc Eskenazi, a Le Bras Freres spokesman. That would allow work on the roof and framing to begin a month later.

By the start of April, work on the scaffold appeared to have fallen behind schedule, said Mr. Leterme, the bidder. It had reached the base of the spire, and the work was becoming more challenging.

Also, people had been sneaking up the scaffolding in off-hours, according to a police officer briefed on the matter. An empty whiskey bottle was found on site, he said.

“The deadline was July. They could have still made it,” Mr. Eskenazi of Le Bras Freres said. 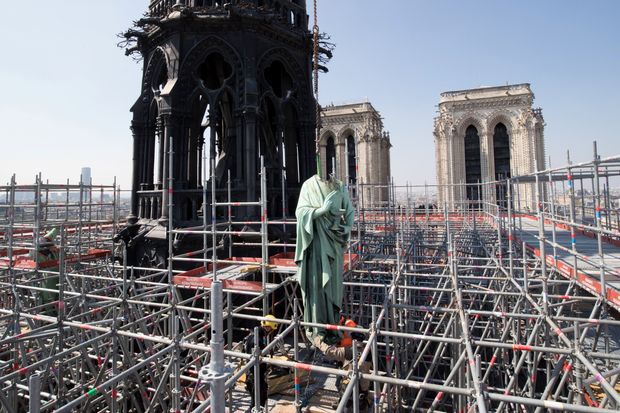 Four days before the fire, restoration workers atop a sprawling scaffold on Notre Dame’s roof removed a statue of Saint John.

On April 11, workers in hazmat suits were filmed removing 16 life-size copper statues of the Apostles and Evangelists from the cathedral for restoration and allowing the scaffolding to advance. Philippe Villeneuve, the project’s chief architect, toured the scaffolding, smiling as a crane plucked one of the statues from the rooftop.

“It’s one of the most magnificent days of my life,” Mr. Villeneuve said. “We are finally working on the cathedral I adore.”

On April 15, a dozen workers from Le Bras Freres were working on the scaffolding, according to Mr. Eskenazi.

The last one on the site left at 5:50 p.m., turning off the electricity, locking the door and giving the key to a church official in charge of the building, Mr. Eskenazi said. About half an hour later, the first fire alarm went off.