WASHINGTON—President Trump ordered a rapid withdrawal of all U.S. military forces from Syria, officials said Wednesday, marking an abrupt shift of the U.S.’s posture in the Middle East.

The U.S. immediately began moving a handful of personnel from Syria and will quickly extract about 2,000 forces over the next few weeks, officials said, ending a four-year military campaign against Islamic State on the brink of its defeat.

“The Pentagon has an order to move troops out of Syria as quickly as possible,” a U.S. official said.

The decision recasts U.S. policy in the Middle East, where the Trump administration has been working to defeat Islamic State, contain Iran’s expansionist ambitions and counter Russia’s influence in Syria, where Moscow has a vital Navy base. The planned exit also worried the U.S.’s Kurdish partners, who risk losing vital backing just when Turkey is threatening to attack them.

The U.S. has long said it would remain in Syria until Islamic State was defeated and local forces could prevent a new rise of extremist forces, and to press Iran to withdraw its forces from the country. While those objectives haven’t been met, Mr. Trump declared an end to the fight against Islamic State, or ISIS, in a tweet on Wednesday.

“We have defeated ISIS in Syria, my only reason for being there during the Trump Presidency,” he wrote on Twitter after The Wall Street Journal reported on the plans.

Sarah Sanders, Mr. Trump’s press secretary, said the U.S. would now “transition to the next phase of the campaign.” Neither the White House nor the Pentagon offered details of the withdrawal.

A senior U.S. official said the U.S. would continue to press Iran and fight Islamic State.

“We will continue to use tools of national power, including economic sanctions and diplomatic pressure, as leverage to press for the withdrawal of Iranian-backed forces,” the official said. “Iran knows the U.S. stands ready to re-engage at all levels to defend American interests.

The withdrawal plan drew criticism from within the White House, among both Republicans and Democrats on Capitol Hill, the State Department and in the U.S. military. Some lawmakers urged Mr. Trump to reconsider, comparing it to former President Obama’s decisions to scale back U.S. forces in Iraq and Afghanistan.

The U.S. is planning a withdrawal of American forces in Syria. They are located mainly in two areas: near the northern border between the Euphrates River and the city of Hasakah, and near the southern town of al-Tanf. 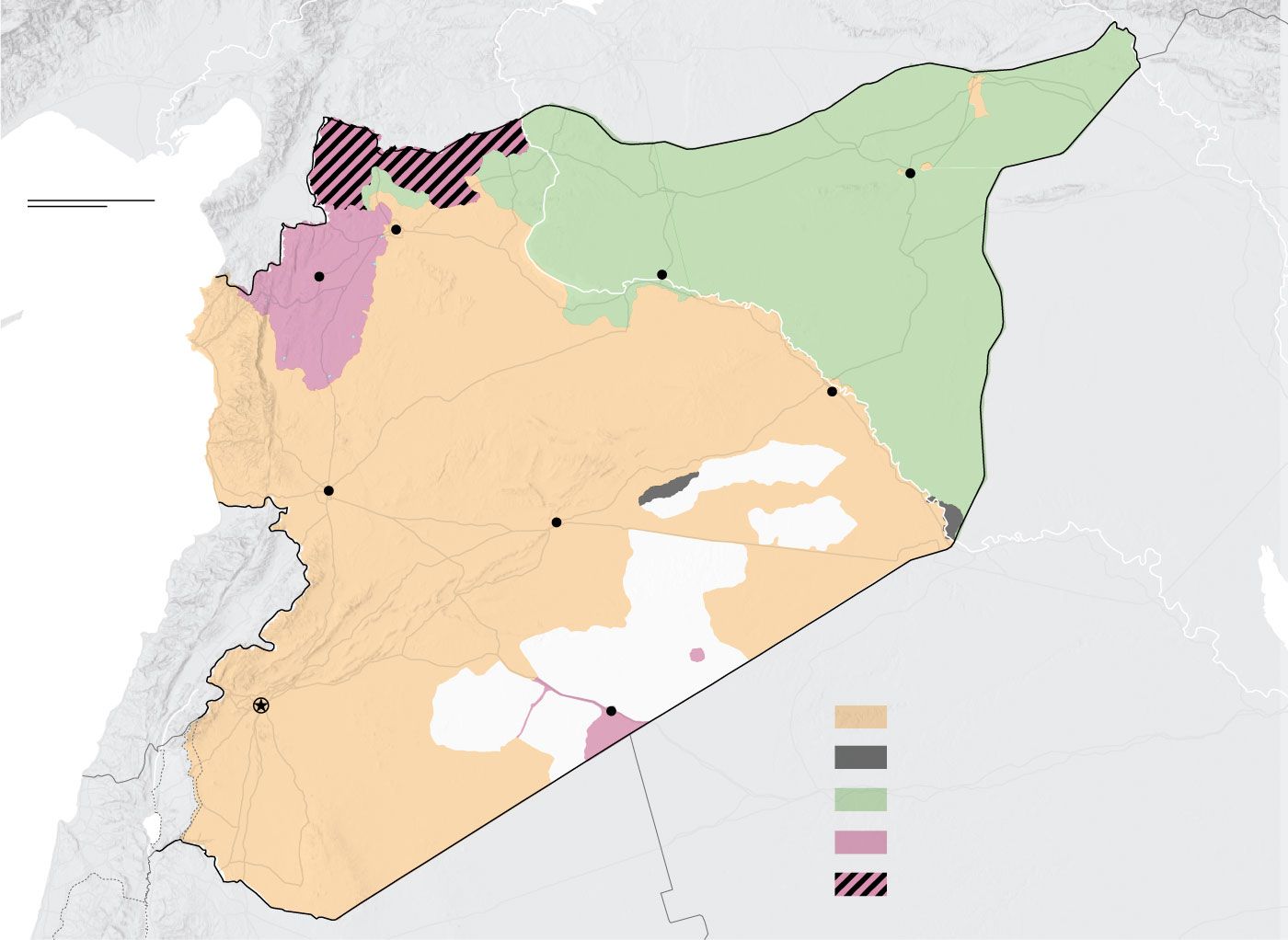 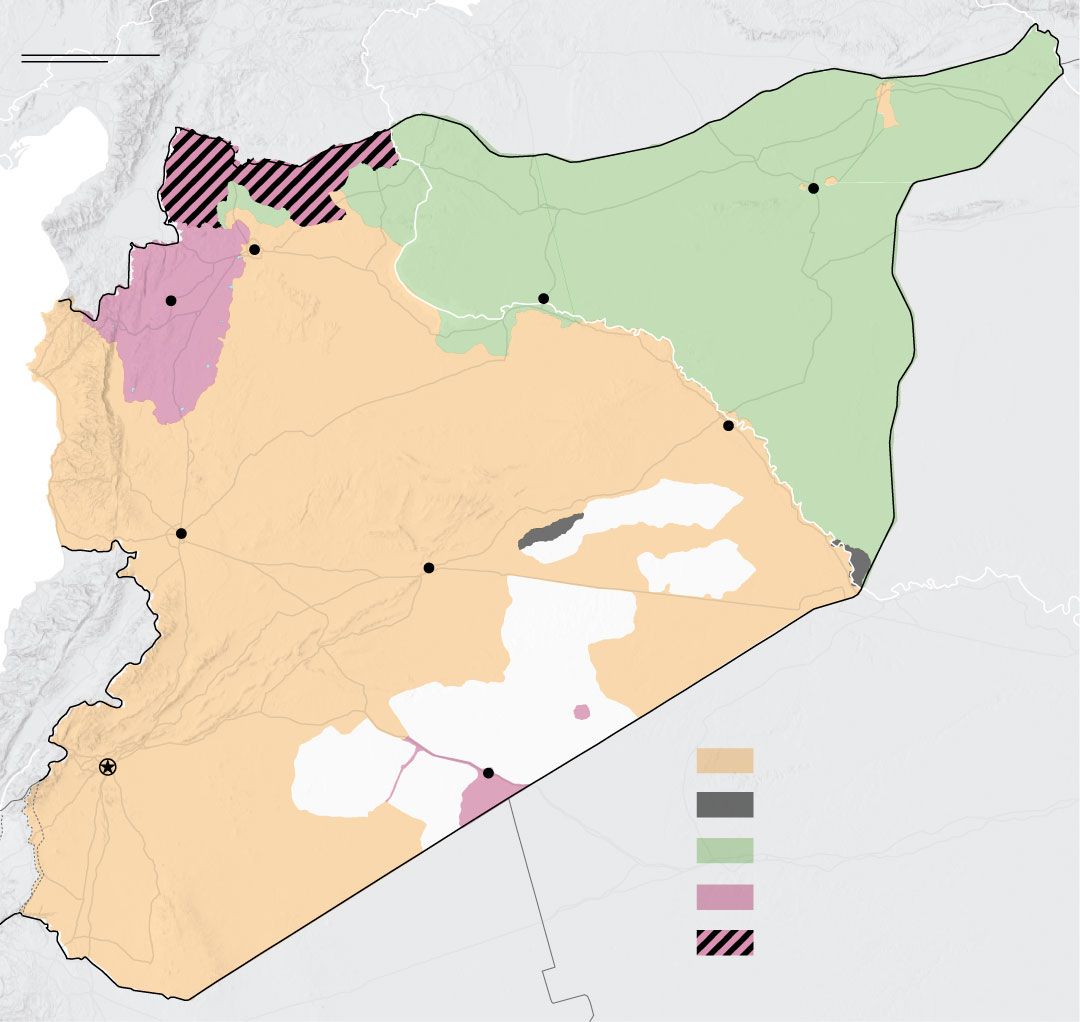 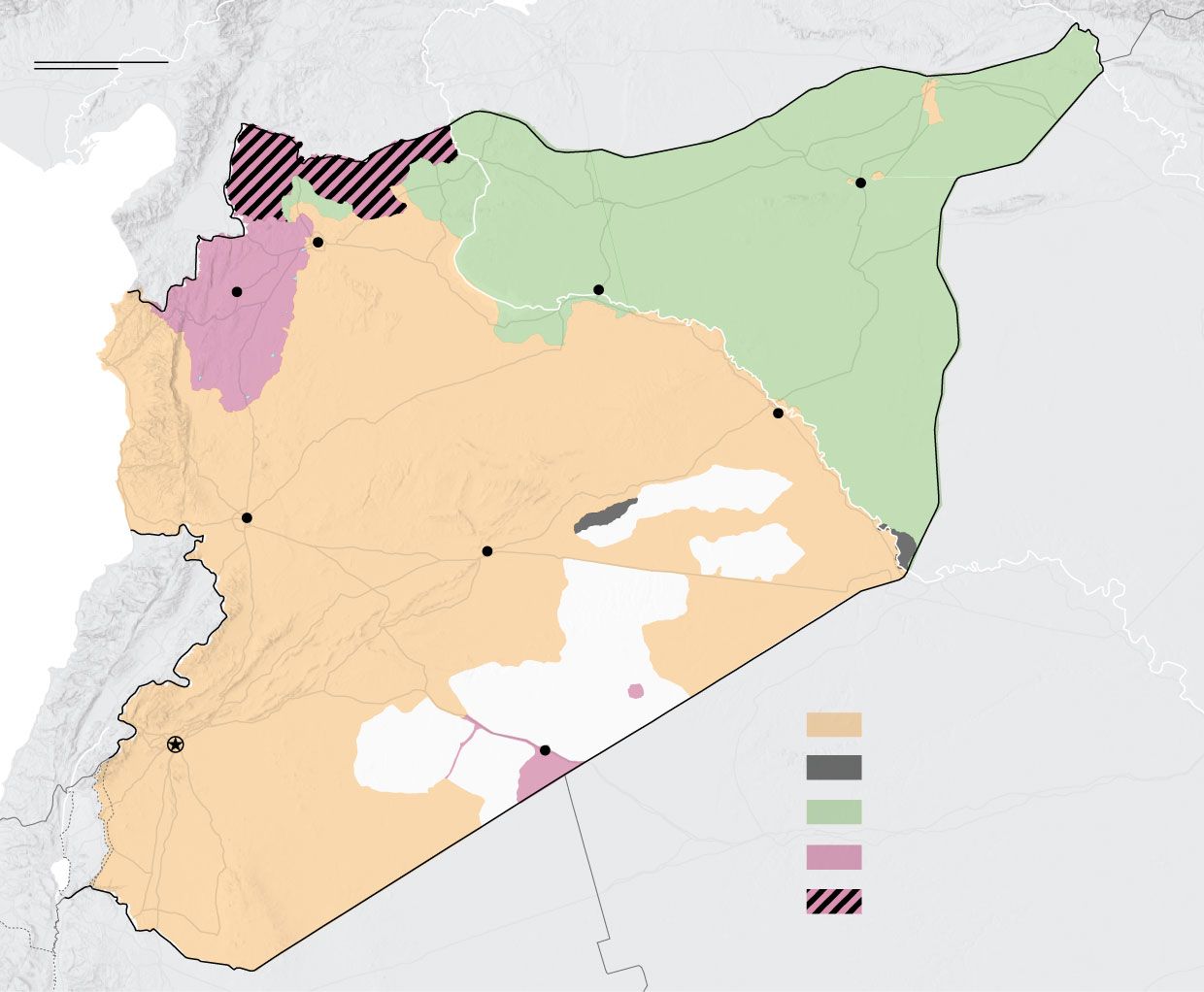 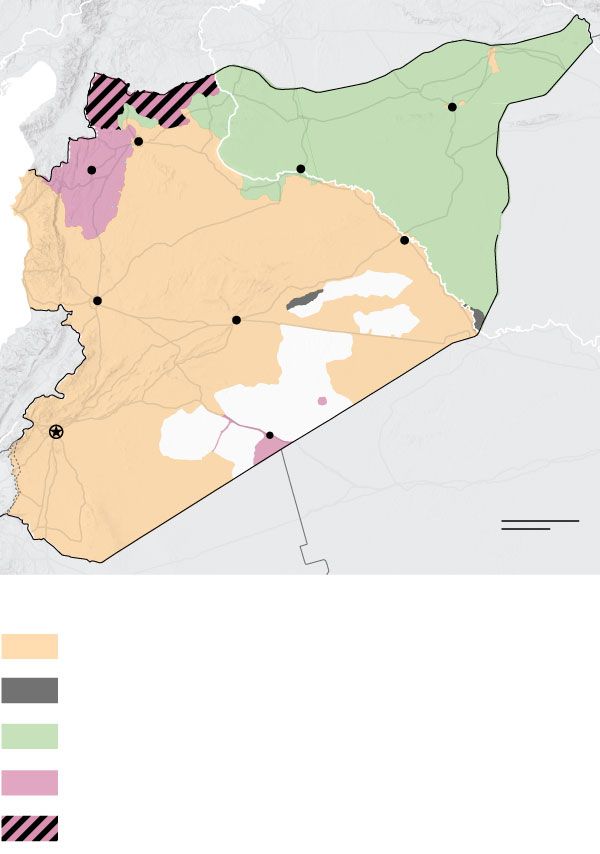 “Withdrawal of this small American force in Syria would be a huge Obama-like mistake,” Sen. Lindsey Graham, (R., S.C.), wrote on Twitter. “A decision to withdraw would also be viewed as a boost to ISIS desire to come back.”

“He’s getting an earful from everybody in the room,” said Senate Foreign Relations Committee Chairman Bob Corker (R., Tenn.).

A few lawmakers praised Mr. Trump for his decision.

“I’m proud of the president today to hear that he is declaring victory in Syria,” said Sen. Rand Paul (R., Ky.). “The president has the courage to say, ‘We won in Syria, and we’re coming home.’”

Another U.S. official cited conflicting interests within the administration between those pushing to keep U.S. forces in Syria indefinitely to counter Iranian aggression versus Mr. Trump’s insistence on disengaging. In recent days, Mr. Trump has grown impatient and told his advisers enough is enough, the official said.

Mr. Trump’s order drew alarm abroad, not only among the Kurds but in Israel, which has carried out hundreds of strikes against Iranian targets in Syria. Israeli officials, who see the U.S.’s presence in Syria as a crucial deterrent, fear the consequences of a U.S. exit.

The U.S. has a strategic base in southern Syria that has served as a bulwark against Iran’s efforts to create a land route for weapons from Iran to Lebanon, where Tehran’s Hezbollah allies pose a worrying threat to Israel.

On Wednesday, Israeli Prime Minister Benjamin Netanyahu said the Trump administration had informed him of the move and reaffirmed its commitment to exert influence in the Middle East.

“This is, of course, an American decision,” he said in a video statement. “We will learn its timetable, the manner of implementation and of course the implications for us. In any event, we will make sure to maintain Israel’s security and protect ourselves in this arena.”

The U.S. move follows a call last week between Mr. Trump and Turkish President Recep Tayyip Erdogan, who has steadfastly opposed the U.S. partnership with Kurdish forces in Syria that he views as a terrorist force intent on destabilizing Turkey. Mr. Erdogan has threatened to launch an assault on the Kurds. The U.S. has relied on the Kurdish forces as the most effective fighting force in Syria against Islamic State.

On the call, Mr. Trump told Mr. Erdogan that he no longer wanted to spend money and time in Syria and preferred instead to focus his energy on domestic issues, said an official briefed on the call. Mr. Erdogan assured Mr. Trump that Turkey would continue the fight against Islamic State—and against the Kurds, the official said.

News of the move came hours after the State Department cleared the way for Turkey to buy $3.5 billion in American Patriot missile-defense systems. Some analysts see the proposed sale as an enticement for Ankara to back off its plans to purchase a Russian S-400 air-defense system. The issue has strained relations between the U.S. and Turkey, two North Atlantic Treaty Organization allies.

The U.S. has long sought to reconcile Mr. Trump’s seemingly incompatible goals in Syria: to withdraw of all U.S. forces from Syria while deterring Iran’s military ambitions there.

Officially, the U.S. military has no authority to battle Iran in Syria. Their mission has been to defeat Islamic State and ensure the militant group that once controlled large swaths of Syria and Iraq is unable to regroup.

That task is largely complete. Islamic State has been effectively cornered in a small stretch of Syrian territory along the Iraq border, where the U.S. military estimates about 2,000 fighters have managed to hold off complete defeat for months.

Earlier this year, the Pentagon said that Islamic State controlled less than 2% of the territory it once held in the Middle East, sparking a vow from Mr. Trump to get all U.S. forces out of Syria in a matter of months.

“We’ll be coming out of Syria, like, very soon,” he said in the spring. “I want to get out. I want to bring our troops back home.”

Mr. Trump’s national security team pushed back against Mr. Trump’s idea and persuaded him to embrace an open-ended military strategy to keep Islamic State at bay and force Iran to withdraw its forces from Syria.

The U.S. sent in diplomatic teams to help rebuild northeastern Syria as the military set up new outposts on the country’s border with Turkey, which views them as an effort to shield the Kurds from an attack by Turkish forces.

In recent weeks, Turkey has moved military forces to the border and Mr. Erdogan said on Monday that they stood ready to attack the Kurdish militants on the Syrian side “at any moment.”

The U.S. military has ramped up its strikes against suspected Islamic State targets in the middle Euphrates River Valley in anticipation of a possible Turkish incursion into Syria that likely would pull U.S. ground partners off the anti-Islamic State fight, defense officials said. Between Dec. 2-8, the U.S.-led coalition launched 251 strikes against Iraq and Syria, almost all of those in Syria, compared with 90 the previous week.

“We have won against ISIS,” he said while standing outside the White House. “We’ve beaten them, and we’ve beaten them badly… Now it’s time for our troops to come back home.”

Marine Gen. Joe Dunford, the Chairman of the Joint Chiefs of Staff, suggested earlier this month that the U.S. mission in Syria was incomplete, saying Islamic State hadn’t been defeated and that only 20% of the needed local forces had been trained so far.

“With regard to stabilization, we have a long way to go,” Gen. Dunford said at a Washington Post live event.

—Kristina Peterson in Washington and Dov Lieber in Tel Aviv contributed to this article.

Write to Nancy A. Youssef at nancy.youssef@wsj.com and Vivian Salama at vivian.salama@wsj.com