About a year ago, a

took off from Atlanta for a three-hour flight to Pinal Airpark, a boneyard for unwanted aircraft in Arizona’s Sonoran Desert.

The once celebrated giant of the sky, which had transformed international travel with its size and range, had flown its last flight for a U.S. airline.

Delta has replaced its fleet of jumbo jets with Airbus A350s, one of a new breed of smaller, ultraefficient long-range airliners. Nearly every other airline in the world is doing a version of the same thing, replacing huge jets with smaller ones.

The newer planes, which include the Boeing 787 Dreamliner, are redrawing the map for global air travel. They can fly just as far as the jumbos, but often are less expensive to operate on a per-seat basis. They allow airlines to offer multiple flights on routes that once justified only a single big aircraft. That helps fill seats and boost profits.

Larger jets are losing their cost edge on intercontinental flights… 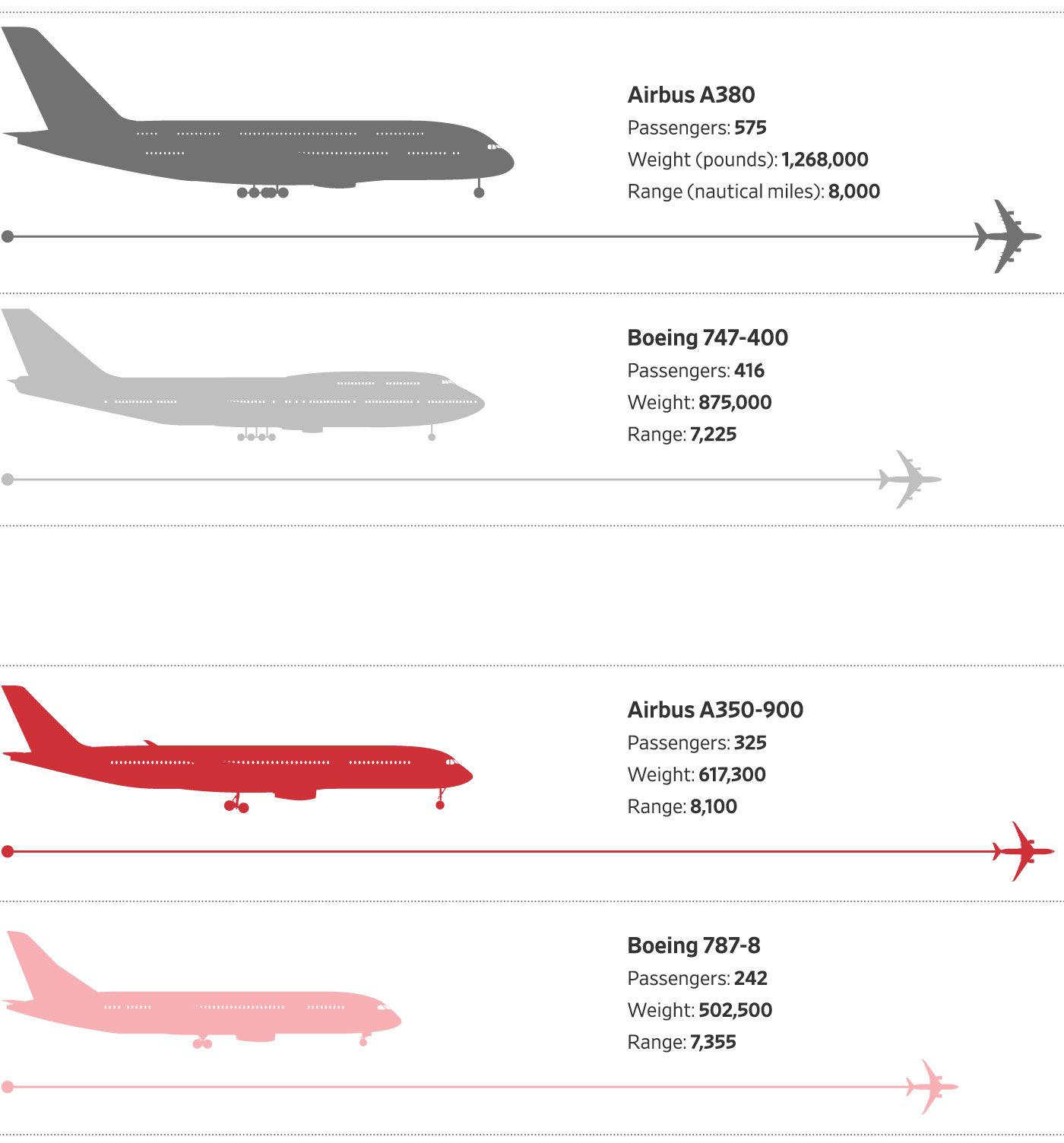 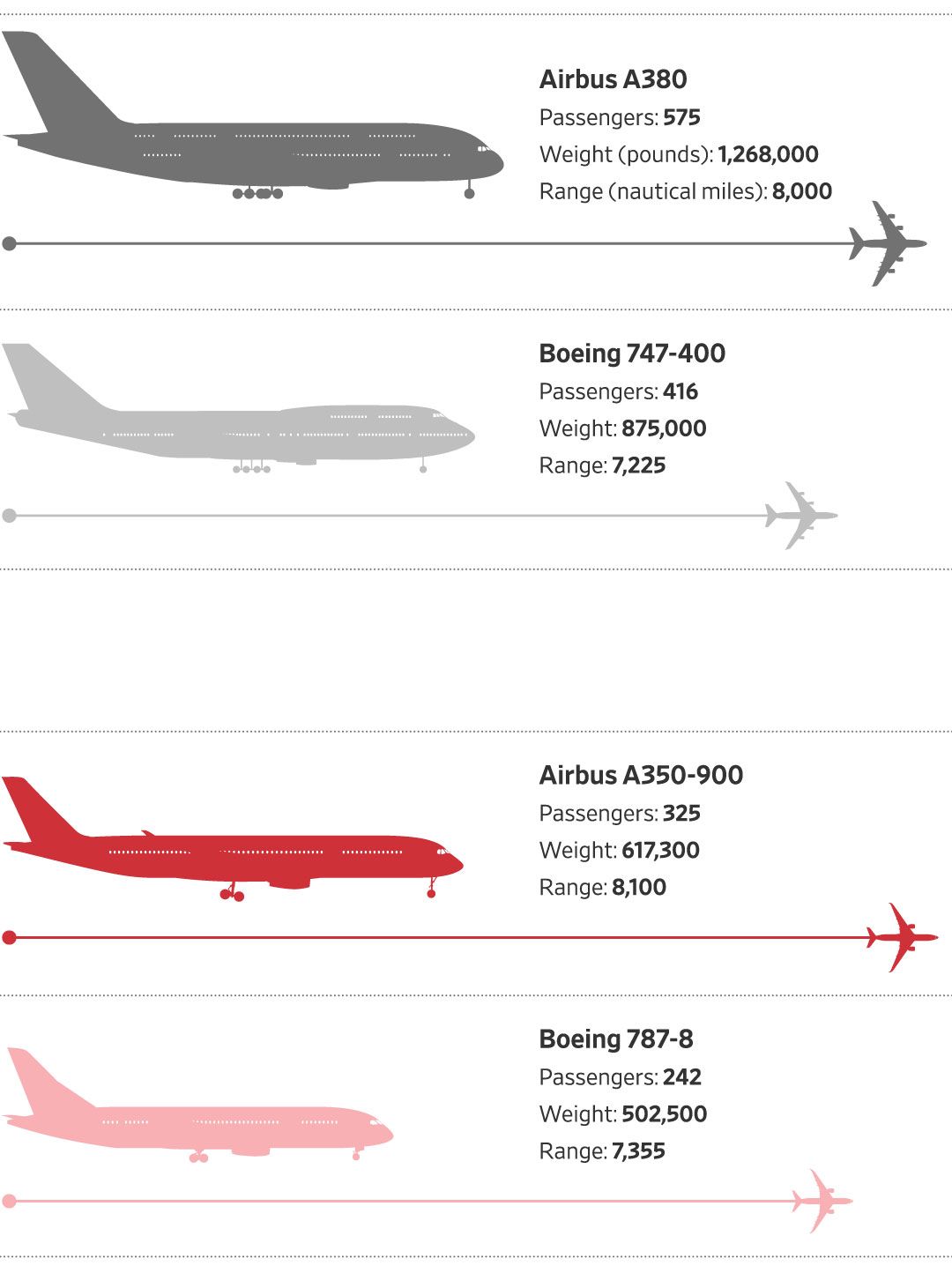 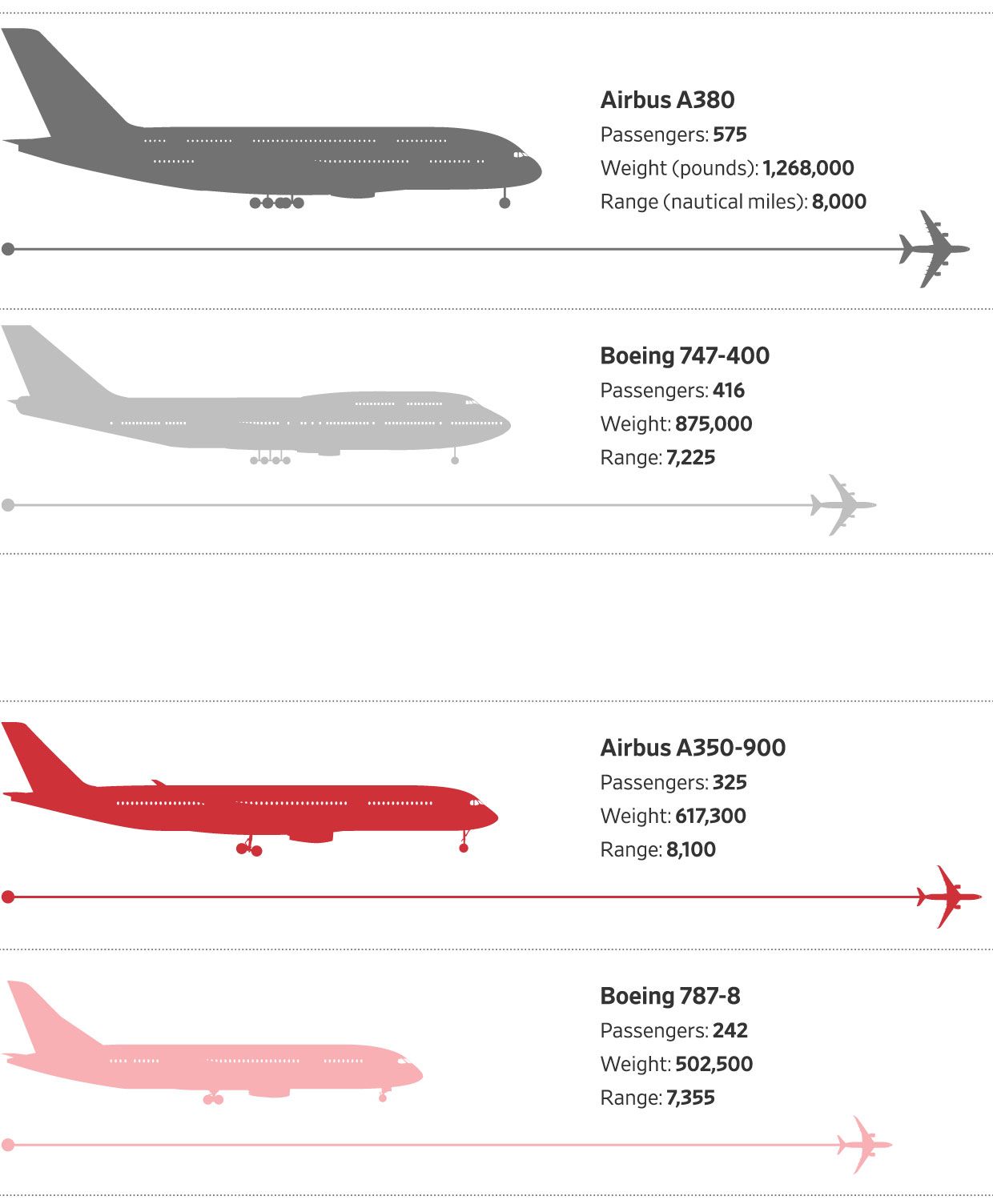 For passengers, this is a mixed blessing. As planes get smaller and flights more frequent, long-haul travel is taking on some of the cattle-car characteristics of domestic travel—inexpensive tickets, cramped seats and no free meals.

On the other hand, for many international travelers, the shift is eliminating what has been an almost mandatory stopover in a global airport hub such as New York, London, Dubai or Singapore.

“Since the dawn of air travel, people always wanted to fly direct,” says Ihssane Mounir, Boeing’s chief jetliner salesman. Smaller planes have changed the economics of the industry, he says, and have “pushed big aircraft, to some extent, out of the market.” 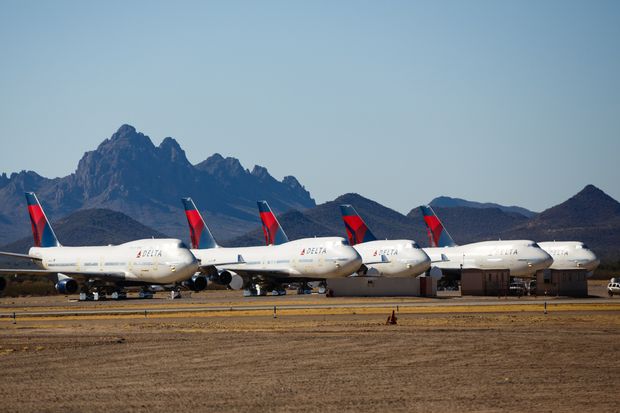 Delta 747s are cleaned and prepped for storage at Pinal Airpark, a boneyard for unwanted aircraft in Arizona’s Sonoran Desert.

Amplifying the shift is the proliferation of no-frills budget carriers flying internationally that have helped to drive down ticket prices and spur a boom in air travel. Long-haul flights—once an extravagant commitment of time and money—are becoming less expensive and more convenient.

Between 2007 and 2017, the average fare between North America and Europe, adjusted for inflation, declined by 40%.

The Boeing 787 and Airbus A350 long-haul planes have allowed airlines to offer direct flights between far-flung cities. Some of them include: 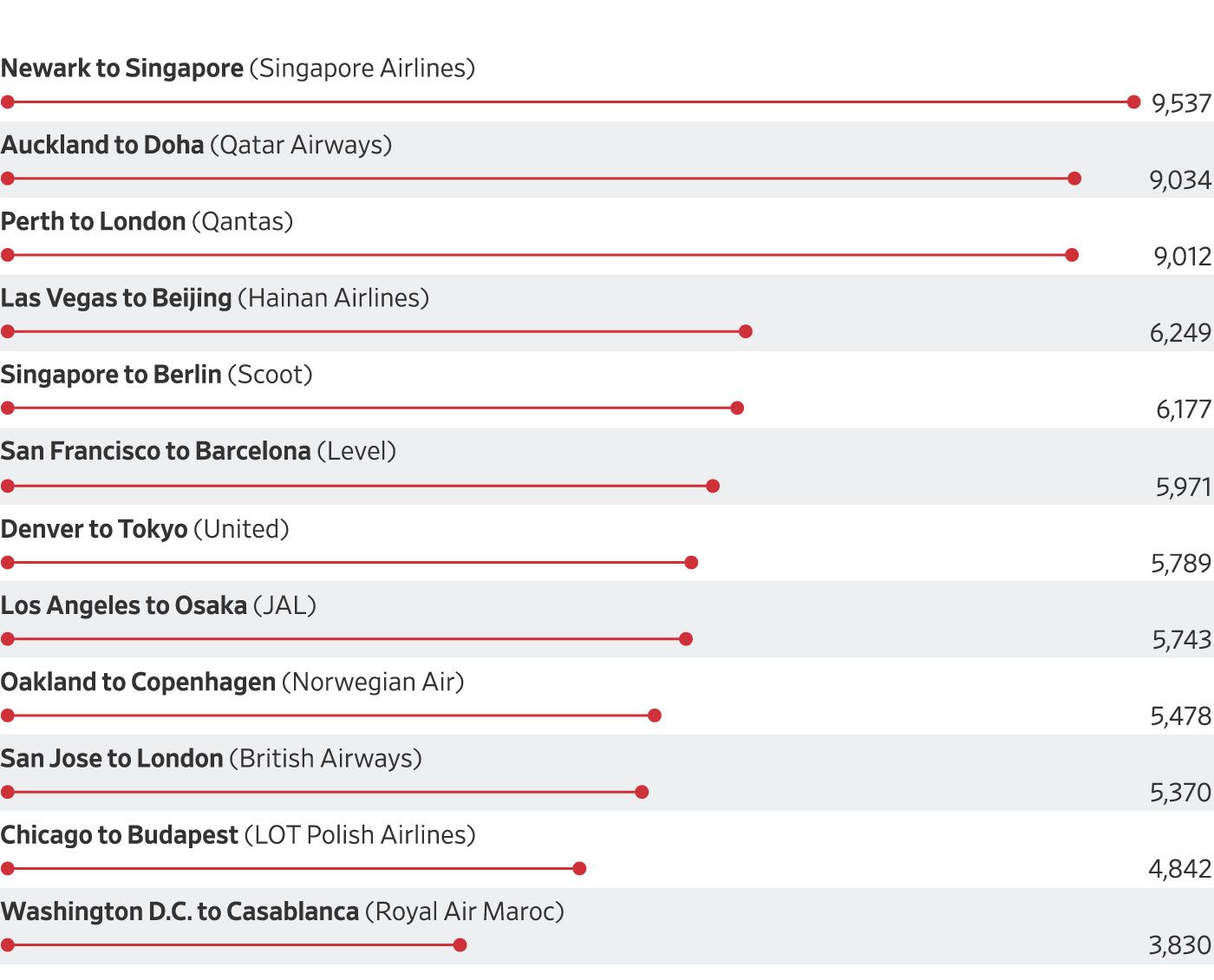 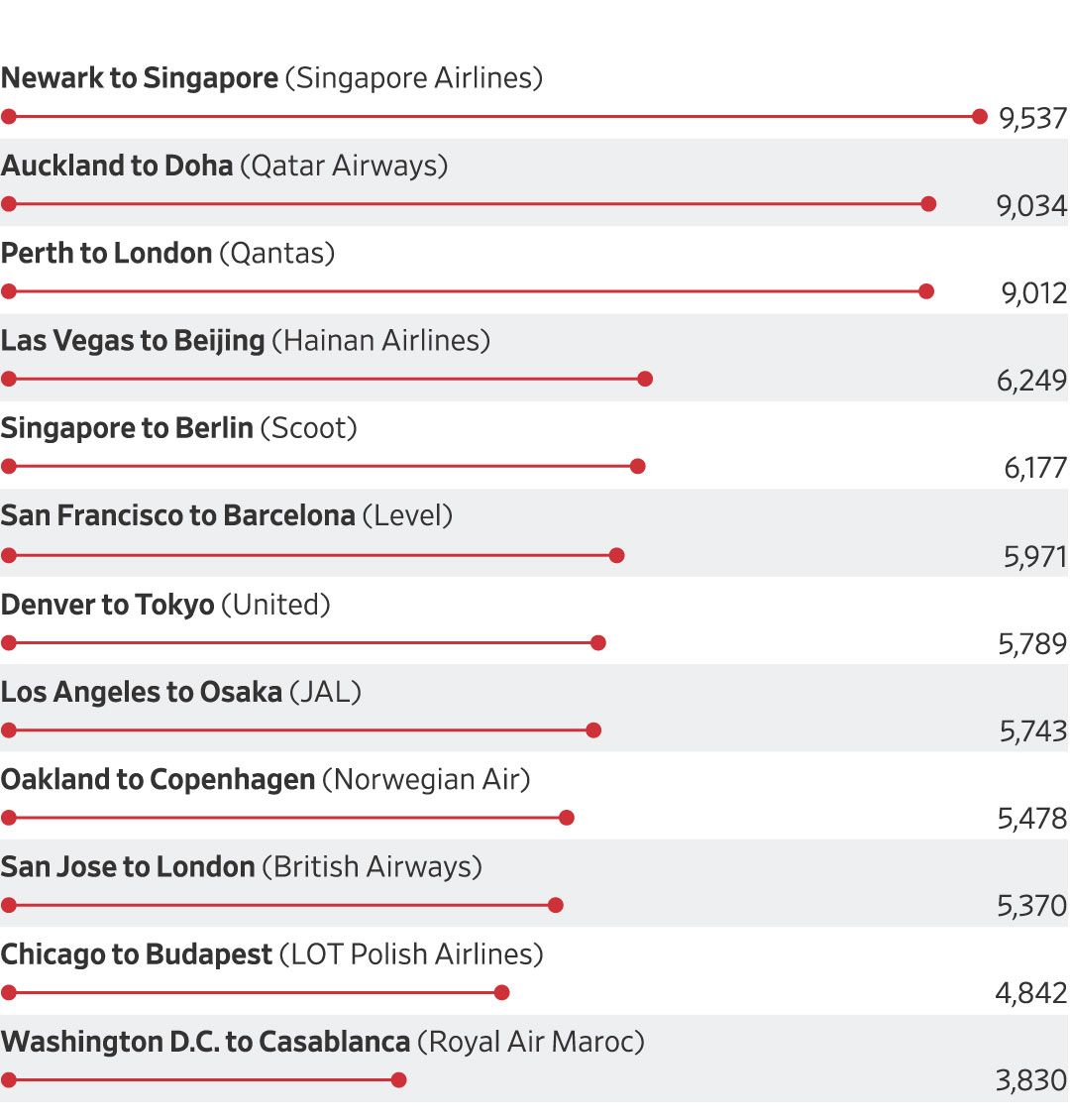 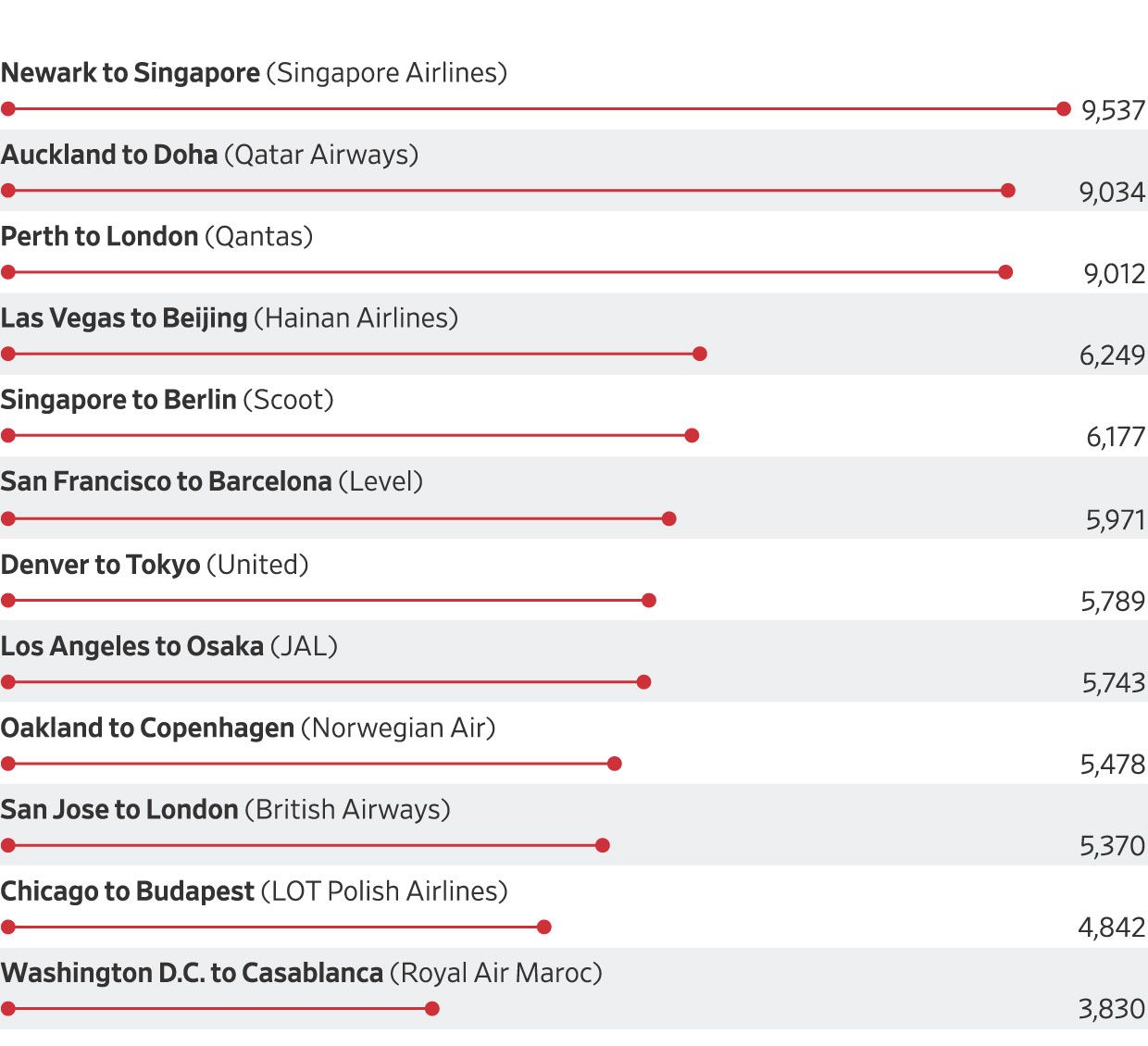 That is a boon for travelers such as Evan Laskaris, a Greek-American who lives in Chicago. When he was growing up in South Carolina, traveling to Greece involved flying to New York’s LaGuardia Airport, taking a cab to JFK, then flying to Athens. Flying from Chicago was easier, but still took 14 hours, including a three-hour layover in Frankfurt.

new direct flight between Chicago and Athens on a Boeing 787 Dreamliner should take 10 hours 40 minutes. “If I can go direct, I’m going to go direct,” says Mr. Laskaris, a program director at a logistics company. “In the past, I didn’t have that choice.”

Airline executives and analysts say the smaller jets have contributed to today’s record profits. Load factor, a measure of seats sold, should reach a record 81.9% this year, according to the International Air Transport Association, in part because smaller planes are easier to fill. The past five years have been the best for collective airline profits, despite the decline in airfares, according to the IATA, an industry trade group. 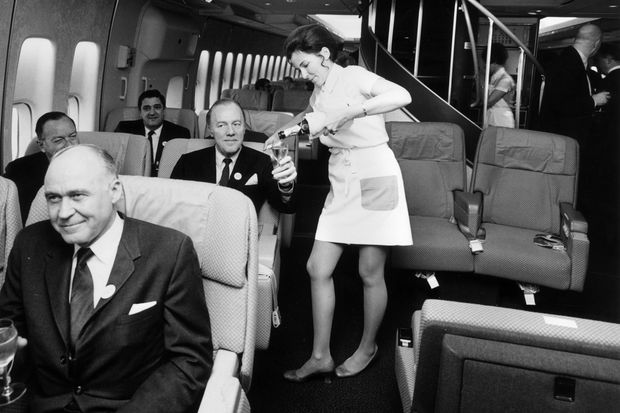 A Pan Am first-class cabin during the heyday of the Boeing 747 jumbo jet.

With many passengers focusing on inexpensive fares, however, many long-haul flights no longer offer the kind of international travel experience that was common in yesteryear. Amenities once taken for granted by international economy-class passengers, such as free food or a checked bag with the price of the ticket, have become extras.

Seating layouts are determined by airlines, not plane makers. Although premium-class passengers still get plenty of space into the new long-haul flights, economy fliers frequently are packed as tightly as they are on short-haul discount runs.

Long-haul travel “is no longer something that is a luxury,” says Jennifer Munro, a hiring consultant and a frequent flier. “Now it is like riding a bus, something that gets us from here to there.”

Global hubs aren’t going away. Even some large cities can’t sustain demand for direct flights. Fewer than four passengers a day, on average, travel between Seattle, where Boeing makes most of its planes, and Toulouse, France, where archrival

is based, according to data from travel-technology company

They still have to fly through hubs such as Amsterdam, London or Paris—and probably will for years to come.

It has been 80 years since

International travel opened up to the wider public only much later, thanks again to aircraft innovation. The Boeing 707, the first mass-produced, long-haul jet-powered plane, entered service with Pan Am in 1958, flying between New York and Paris.

Boeing’s 747, which began flying commercially in 1970, came to define trans-Atlantic flight for a generation. Almost two decades ago, Airbus bet big on its own giant, four-engine aircraft—the A380 superjumbo jet.

The two plane makers shared the same idea: Airlines, saddled by high operating costs and limited airport slots, would shuttle large numbers of passengers in a limited number of giant planes between a handful of global hubs. Getting to one of these hubs usually involved a connecting flight, as did reaching a final destination from the hub at the other end.

For much of the modern aviation era, a plane’s range was mainly dictated by how much fuel it could carry. Bigger planes, with bigger gas tanks, could fly longer.

In 2003, Boeing started developing what would become its twin-engine 787 Dreamliner. Made partly of composite material, it was light enough to fly as far as a 747. But it was much smaller, carrying an average 242 passengers, compared with the 410 typical for the 747. 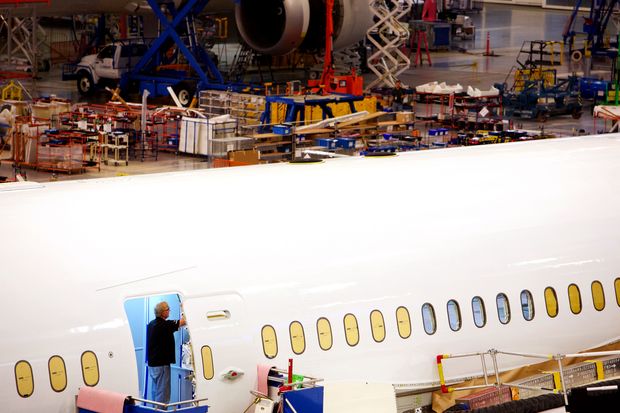 A Boeing Dreamliner 787, one of a new breed of smaller, ultraefficient long-range airliners, sits in a production line in North Charleston, S.C.

Airbus, which had just bet big on the 575-seat superjumbo, answered with its own version of what the industry has dubbed a “hub buster”—the A350, which typically seats 325.

“The 787 and A350 were, and are, disrupters,” says Nico Buchholz, a former fleet planner at Deutsche Lufthansa AG.

The Dreamliner embraced a host of new technologies, notably its weight-saving carbon-fiber fuselage. Composites account for half of the weight of the Dreamliner’s hull. The plane’s electric system replaces some of the heavy hydraulics and pneumatic components typical in big jets. All that, plus more efficient engines, allow the plane to undercut the larger planes in an important metric: per-seat flight cost.

Bigger planes once won that contest because fixed costs such as pilots, crew and fuel were spread out over more seats. But the new breed of lighter planes upended that.

United Airlines spent about $17,748 an hour to operate its latest 747 in the 2017 fiscal year, according to consulting firm Oliver Wyman. It spent $10,123 for one of the airline’s smaller 787 Dreamliners. That translates to a per-passenger cost of 9.19 cents a mile for the Dreamliner, compared with 9.23 cents a mile for the bigger plane.

The smaller planes also are easier to fill up, reducing the need to offer discounted tickets.

So airlines began buying the smaller planes and mothballing their bigger ones.

consigned one of its first A380s to the scrapyard. It was only 10 years old. Nobody else was found who wanted to fly it.

“The role of the big planes has diminished,” says Campbell Wilson, senior vice president for sales and marketing at the Singapore carrier.

The company’s Scoot budget carrier operates Boeing’s Dreamliner for long-haul service linking Singapore with cities such as Berlin and Athens. In October, Singapore Air began flying the world’s longest route, between Singapore and Newark, N.J., with the Airbus A350.

Boeing, which has sold more than 1,400 Dreamliners, plans to deliver around 140 this year. It will make just six 747s this year, down from an average 30 a year since 1969. Almost all of the new 747s are headed for freight service. 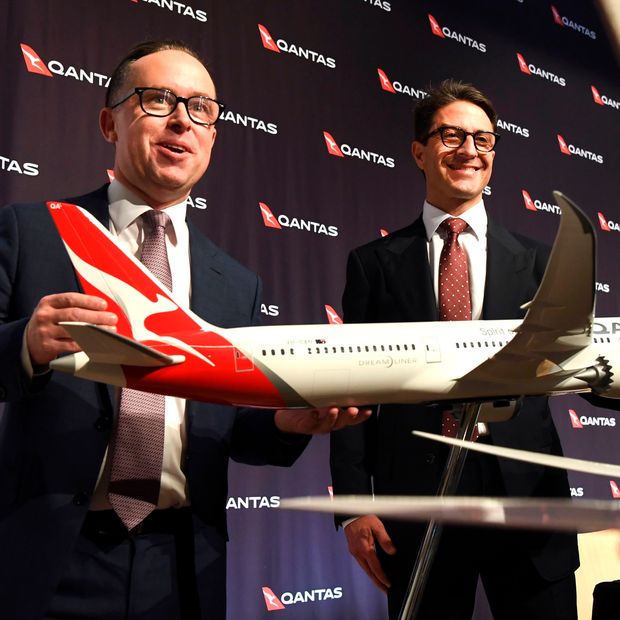 , one of the country’s biggest, has been a steady buyer of the giant 747s and A380s over the years. Today, Alan Joyce, Qantas’s chief executive, says the airline can fly two Boeing Dreamliners to an overseas destination more profitably than one A380, transporting about the same number of passengers.

The push for more direct routes doesn’t only stem from technological innovation. Governments have opened up air access to ease congestion at big hubs and foster more convenient flights. Flights to China used to focus on Beijing, Shanghai or Guangzhou. Now cities such as Wuhan, Xi’an, and Hangzhou have direct international air links.

When Japan’s primary hub, Tokyo Narita, filled up, Japan’s government expanded the largely domestic airport of Haneda and opened it to overseas flights.

Some airlines still focus on big jets. Dubai, the home airport of Emirates Airline, is a perfect stopping-off place for travelers between Asia and Western Europe and North America. Emirates is the world’s biggest buyer of the A380, Airbus’s superjumbo.

Emirates President Tim Clark says that without big planes, the growth of air traffic will be constrained by airports that are reaching their limits for takeoff and landings slots. Dubai is building a huge, five-runway airport designed to eventually handle 250 million passengers a year.

“In the end, you are forced into a higher gauge of aircraft,” he says.

That isn’t the way other airlines are thinking. At an airfield near Tarbes in southern France, about 70 miles from where the A380 superjumbo made its maiden voyage 13 years ago, one of those planes is parked on the tarmac.

Singapore Airlines decided to stop using the plane, which is owned by Dr. Peters Group, a private company that finances aircraft. After looking for a new customer, the owner has decided to sell the plane for parts.

Write to Robert Wall at robert.wall@wsj.com